Here is what I've been working on lately.  Each box will have drawings inside.  Also, the wax feet I was working on for my crows have been finished and are attached to the crows in the images below. 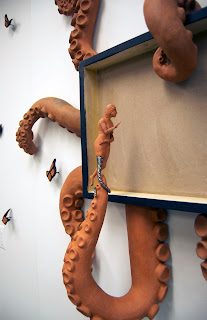 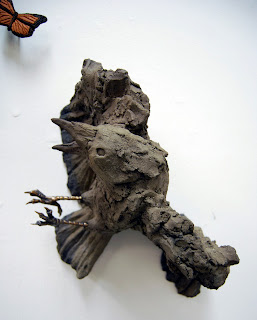 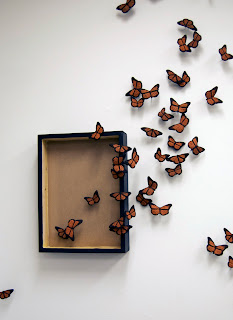 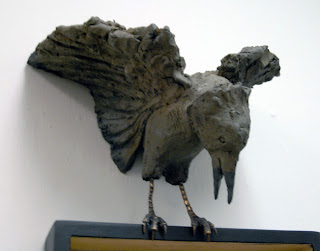 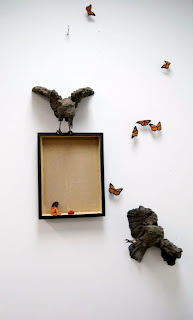 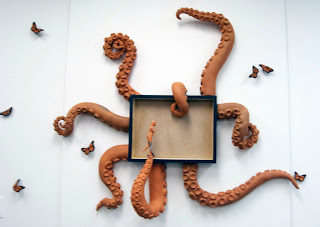 For our exchange project I chose three pieces from three different people.  I have a Jason Stockman mug that I glazed with slips and a reduction red glaze that unfortunately did not get reduced in the kiln.  Gratia Brown is another person whose work I chose.  I finished her sculpture with a variety of mediums including underglaze washes, gold leaf paint, encaustic paint, oil stains, and nail polish.  The last piece I finished was a small Kevin Rhode sculpture.  This was finished with water color washes, paint, encaustic, and oil stain.  Here are some images of the finished pieces . . . 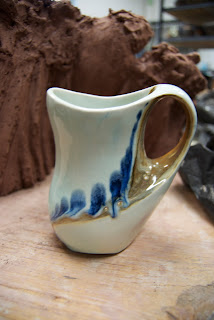 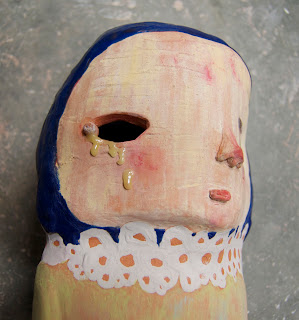 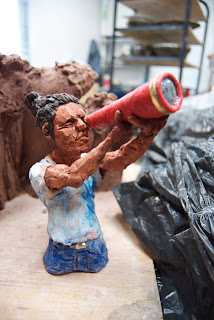 Posted by Anne Mormile at 9:27 AM No comments:

Pieces of the Puzzle

Hello everyone,
Below are a few pictures of some small pieces I've been making.  These images are of smaller pieces belonging to larger projects.  The red crow claws are carved out of wax and will be cast in bronze.  I also made press molds of monarch butterflies so that I can make an abundance of butterflies for another larger piece.  The little people are actually part of some boxes I've made that will hold some of my drawings.  So. . . .  Here's your sneak peak into my studio. 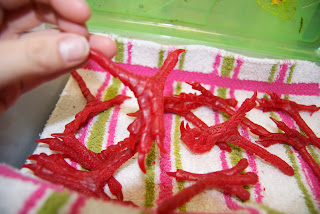 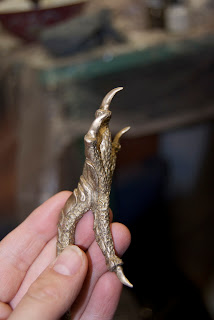 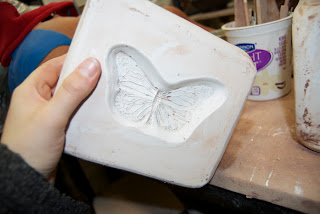 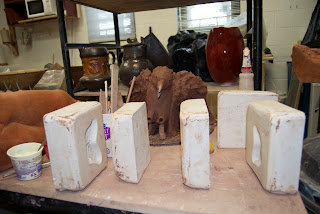 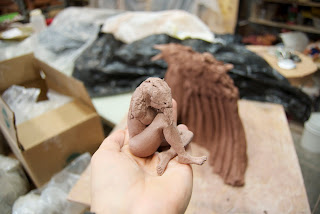 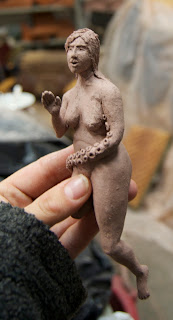 EXCITING!!!  Right at the end of December, I stumbled upon the possibility that you can Raku copper metal!  I LOVE Raku, you can imagine my excitement at this discovery.  So, here's my silly story. . . I was taking a metals class this past semester as part of my minor, and the last project of the semester had to somehow incorporate enamel.  Well, I have never used enamel, but found that it is quite similar to glazing and firing a pot.  I occasionally have an obsessive personality, especially when I am learning some new technique.  Therefore, instead of doing one piece in enamel, I decided I would make a sculpture that would incorporate about 40 copper pieces.  I actually posted a picture of this sculpture in an earlier post--it's the picture of a face with a bunch of pieces protruding from the neck and forehead.  If you have never enameled before, once you have adhered the powdered enamel onto your metal surface you put it into a preheated kiln at about 1500 degrees F. for one to five minutes checking continually until the enamel is to the point you want it to be.  One thing that is really interesting is that you can fire your metal and build up layers of enamel and keep re-firing until you get the desired effect.  Also, there are three specific enamel surfaces other than simply opaque or translucent.  If you fire it quickly and take your piece out of the kiln before the enamel has matured, it has a rough colorful surface that looks like crystalized sugar, hence the name sugar enamel.  The second looks much like an orange peel glaze, so it's called orange peel enamel.  This is done by letting the enamel just start to mature and removing it before it has fully melted.  The last, obviously, is simply letting the enamel fully melt and mature in the kiln for a smooth glossy surface.  So, for my 40 pieces I couldn't possibly just enamel once.  I had to do each piece twice.  My first layer was fully matured enamel, then, in doing the second layer, I found the magic Raku Copper.  I decided that each little piece needed to have a sugar coating fading out from the base where they are attached to the sculpture.  Ok, so here's the magic--I ended up taking so many pieces in and out of the kiln at a constant pace, that I accidentally laid a few hot pieces just out of the kiln on some dry paper towels.  When I realized what I had done and lifted the piece off, I noticed, with great excitement, that I had a RAKU surface on my copper!!  So I re-fired all of my pieces AGAIN to obtain a similar surface.  This is certainly something I would love to explore more at some point.  If you are going to try this, I have a few suggestions to start.  First, I found that if the piece is over-efired, the results will not be as noticeable.  Next, I found that using a transparent enamel seems to work better than the opaque, and the sugar coating has the best results.  I have not tried this with silver.  I believe the copper is playing a role in this process much like in the ceramic Raku process.  The more I experiment, the more I will share my discoveries with you all.  Until then, happy hunting for those new exciting "Oh wow" moments.
Posted by Anne Mormile at 2:34 PM 1 comment:

I will post images of pieces I am currently working on soon.  Until then, I will touch on what I've been doing with a few words.  In the past, I have made crows as part of my installations and have always had difficulty making the feet work for me.  Usually, by the time I have them the way I want they are so fragile that they just break or make it through the firing and are simply too fragile for my life style. So, BRONZE is my savior.  I have been carving my crow legs and feet out of wax which I intend to cast in the very near future.  Though a very small portion of my pieces will be bronze, I really believe it will make a huge difference in both the strength and look of certain sculptures.  This is a small, yet exciting step for me.
Posted by Anne Mormile at 2:02 PM No comments:

Hello Everyone,
I've had a few people ask to see my teaching philosophy; and although it is always a work in progress, here is my current philosophy for anyone who may be interested, or in need of ideas to write their own.
ARTIST TEACHING PHILOSOPHY
Anne Mormile
Art is an integral part of the human experience.  Its universal value is established in cultures throughout the world.  Consequently, art and craft need to play an essential role in the education of students.  As a teacher, I integrate critical thinking skills, design, and problem solving while focusing on the practice of art in a contemporary, as well as a historical context.  The challenges posed by an art teacher can greatly enhance a student’s ability to take those critical thinking skills and apply them to many other disciplines such as mathematics, science, and the complexities of everyday life.  Art is one of those special disciplines that challenges us in both manual dexterity and conceptual thinking. The practice of creating enables us to express our emotions, thoughts, and philosophies while requiring us to solve complex problems, keeping our minds probing and inventing.  Art can be a documentation of our history; it can be personal, healing, political, an advertisement, design, or simply a study of our environment.  My enthusiasm for my own creative process and work overflows into my excitement to share that knowledge and drive with my students.
Ceramics is a discipline in which craft is highly emphasized.  Craft is a valid and important part of the historical and contemporary ceramic world.  In my classroom, students learn the importance of both craft and function, and how it plays a role in contemporary ceramics.  However, I also feel it is equally valuable to approach ceramics as an art medium.  Clay is a material with infinite possibilities, and by introducing multiple views on the use of this medium, I believe it prompts students to reach for discoveries found outside the tradition.
I have many objectives in my teaching. One of my goals is to give students the sound technical training needed to develop work while simultaneously teaching them how to formulate and articulate the ideas behind the objects they are creating.  Having strong foundation skills and a sense of design, thought, and philosophy are important components to any practice in the arts.  By sharing my knowledge of ceramics with my students, it is my hope that someday they will be able to go even further with their own explorations in the field than I have.
It is important for me to present information both with enthusiasm and in an understandable manner that promotes drive and curiosity.  A class needs to be well structured in combination with flexibility on the teachers’ part for the presentation of materials and projects.  I believe that all teachers need to be open to learning from their students, in order to evolve and grow as mentors.  It is important to listen, observe, and respond to the needs of your students.  In presenting information to a class, you must be knowledgeable of both the materials and processes you are teaching, as well as of their history.  It is important to know where an idea came from, how it has developed over time, and how it continues to develop.
Art and craft play an immense role in our world; therefore, their inclusion in education should be pursued wholeheartedly.  They nurture us while giving expression and meaning to our lives, helping us shape our innermost thoughts.  Through my teaching, I hope to inspire students to reach their own creative potential.
Posted by Anne Mormile at 1:51 PM No comments: